The Facts on Salt

Open All | Close All

The Importance of Salt

Salt and water are the essence of life and the foundation of health, so a healthy relationship with salt is critical to our health and wellness. Salt is the conduit for the electric charge, which gives energy to our cells and is the basis for every action in our bodies. Salt is as important to our bodies as water, but all salt is NOT the same!

WHAT IS HIMALAYAN CRYSTAL SALT?

Over 260 million years ago, a vast primordial ocean covered the Himalayas. The salt from the unpolluted ocean was preserved as large crystal formations in the foothills of the Himalayan Mountains, making Himalayan salt absolutely pristine and natural, identical in composition to the ancient primal ocean.

Evolution Salt Co's Himalayan Crystal Salt is pristine, pure and 100% natural and raw. It is the most beneficial and cleanest salt available on our planet. Our salt is never heated, treated, refined or processed in any way. It is hand extracted, water washed, air-dried and stone ground and contains all of the 84 trace elements found in our bodies. The minerals are raw in their most natural and easily absorbed form making it easy for the body to metabolize. 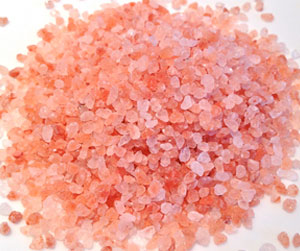 Earth’s first ocean, The Primordial Sea, was a pure and unpolluted ocean that covered much of the planet nearly 300 million years ago. This sea contained all the essential elements and minerals required to sustain and propagate life. It is from this ocean that life began to diversify on Earth.

Roughly 260 million years ago, this ocean evaporated leaving behind a deposit of the purest and healthiest salt found on Earth. This deposit is situated 1000 feet below the surface of the Himalayan Mountains in Pakistan, free from atmospheric, surface water or groundwater interaction. The crystal salt deposit runs 12,000 feet deep and over 150 miles wide. The salt crystal remains as pure as it was 260 million years ago.

Himalayan crystal salt in its most perfect form is geologically referred to as halite. It is mined in the Khewra Salt Mines which is the second largest salt mine in the world. The salt comes out in a reddish or pink color, with some crystals having an off-white to transparent color.

Alexander the Great discovered the salt reserves at Khewra, however his army’s horses discovered the mine. The ailing horses were found licking the stones, which ultimately lead to their recovery.

In the olden days it was called “king’s salt” or “white gold” because its use was a privilege reserved for nobility. Roman soldiers were actually paid with salt, which is reflected in the word “salary.” Salt was more important for survival than gold.

The Difference In Salts

Table Salt: An industrial bi-product that is heated to 1200 degrees. This process separates and isolates the sodium chloride bond, making this salt a foreign substance to our bodies. We have difficulty absorbing it properly and it is even harder to eliminate from our system. To make matters worse, table salt contains all sorts of toxic chemicals and anti-caking agents, along with other harmful additives.

Sea Salt: While these salts still have some minerals, the process of refining and heating destroys the cross bonding and electrolytic energy of the mineral salts. As sea salts come from polluted oceans, contamination by heavy metals and other toxins can also be a major concern.

Himalayan Crystal Salt: Himalayan Crystal Salt is the most beneficial and cleanest salt available on our planet. We manufacture our products from the crystal salt that has been deposited in the earth for more than 260 million years. The salt is traditionally hand mined at depths reaching 2,300 – 3,600 feet. Evolution Salt Co's Himalayan crystal salt is hand picked, water washed, air dried and stone ground. This crystal salt is absolutely pristine and natural, identical in composition to the ancient primal ocean. Our salt is never heated, treated, refined or processed in any way. It contains all of the 84 trace elements found in our bodies. The minerals are raw and in their most natural and easily absorbed form.

WHAT IS A SOLE BATH

In contrast to a normal bath in which moisture is extracted from the skin, a sole bath allows salt to be stored in the upper callous layer of the skin and binds water. This maintains the natural, protective film of the skin so the skin will not dry out; making sole baths not only great for detoxification and relaxation, but also incredibly healing for dry skin.

How to Prepare a Sole Bath:

WHAT ARE CRYSTAL SALT LAMPS?

Himalayan salt lamps are made from beautiful pink Himalayan salt that is mined in the foothills of the Himalayan Mountains in Pakistan. These lamps have hygroscopic properties and readily absorb moisture out of the air. The natural color of a salt lamp creates an orange or pinkish glow that can add beauty to any decor.

Himalayan salt lamps make a great addition for any space: in your bedroom, at the office, by your computer, next to your television, or anywhere else you want to brighten a space with a beautiful glow. For maximum benefits, we recommend leaving your lamp on as much as possible.

WHAT IS SOLE DRINKING SOLUTION? 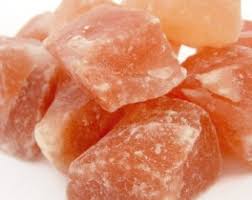 Water and salt are the essence of life. When the two are combined to the point of saturation, at a 26% solution - it is called Solé (So-lay).

Taking Solé on a daily basis is known to provide many amazing health benefits:

WHAT IS SALT AIR THERAPY?

Himalayan crystal salt is the 260 million year old secret. The use of salt for therapeutic treatment of asthma and other respiratory ailments is nothing new. Halotheraphy (Halo=Salt in Greek) and Speleotherapy (Speleo=Cave in Greek) are well known in Europe. Both treatments fall under the category of physical therapy, or drug-free treatment of disease.

Salt inhalation was recommended by Hippocrates, the father of modern medicine, who applied the age-old method of inhaling the steam from boiling saltwater.

Spending time in a natural salt cave is called Speleotherapy, but since most people don't have access to a salt cave, salt rooms were created to recreate the conditions of a salt cave above ground. This type of salt therapy is called Halotherapy, which is a natural, safe and drug-free treatment and is known to effectively provide long term relief.

Himalayan Crystal Salt is naturally anti-bacterial, anti-fungal, anti-viral, and anti-microbial and gets deep down into our lungs, so that it cleanses the entire respiratory system including mouth, sinuses, nasal cavities, throat and lungs. The tiny particles of salt will help flush impurities and are known to be very beneficial for respiratory health.

Evolution Salt Co's Salt Air Inhaler is a convenient, drug-free and non-invasive device for enjoying the benefits of salt-air therapy at home. When you inhale through the mouthpiece of your salt air inhaler, the passing moisture absorbs microscopic particles of this incredibly pure, bio-energetically alive and mineral rich Himalayan Crystal Salt.

This is a safe and natural product using 100% natural, raw, mineral rich, coarse grind Himalayan crystal salt. The salt inhaler has no contraindications and should not interfere with any other medication or therapy, however when starting any new medication or therapy you should always consult with your healthcare provider first.